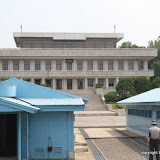 We Bee’s woke up bright and early to catch the bus to South Korea’s Demilitarized Zone, also known as the DMZ. Our families and close friends know that we are located very close to the DMZ.  To put things into perspective if you were to make a direct straight line from where we live to the DMZ we are only about 15 miles away.  Yes, we know we just made our parents and grandparents cringe.

Our trip itinerary was as follows:

-Departure (Passport and Attire Check) There is requirements to what you can and cannot wear.

For those of you who really do know much about the DMZ or the significance of it we will provide you with the basic overview of the things we took away from the tour.

The DMZ is a strip of land that is 4km wide and 248km long. This strip of land is what divides South Korea from North Korea. This border is no joke! There was such a nervous energy on the trip because of the security briefing you attend, the high fences topped with barbed wire, tons of observation towers, the antitank and minefield to the left and right of the highways, armed soldiers, and the cameras and microphones monitoring you from both sides as you tour.

Once we made it through the unification bridge we arrived at JSA Camp Bonifas. We were told what we could and could not bring from the bus before entering into the orientation in the auditorium in Camp Bonifas.  The facility received its name after an American soldier killed by North Koreans in an “ax incident” over the cutting of a tree. Google hatchet incident or Operation Paul Bunyan for background information. We were required to sign a release advising us that, if anything happens to us on the tour, it’s our responsibility….eek!….

After the brief we got to go inside one of the actual main conference buildings. This is where official meetings are still sometimes held today. Once inside of the building we were intrigued that the room was very simple with almost a classroom style feel to it. There were large wooden tables and chairs. The tables had live microphones sitting in the middle of them. We were told that both sides were monitoring everything we said within this room. We were told not to touch anything within this room and this also included the two guards standing in a taekwondo stance at both sides of the room. Within this single room you can literally cross over from South Korea to North Korea. You could just see and feel how the entire group was thinking the same things and how this experience was so surreal

While we were inside the building we were told and got to see that two of the ROK soldiers stand half-concealed by the building that we were in. This allows the soldier to signal if they see anything going on within the North Korean side.

Once we were back outside we could see North Korean soldiers peering through binoculars watching our tour group as we stood on the steps standing only inches away from the North Korean side.

After we left the conference building we were loaded up onto a different bus from the one that we originally came on. While on the bus the guiding Soldier told us that there are only two villages in the DMZ. These villages are near the city of Panmunjom. On the south side the village is Daeseong and on the north side the village is Giljeong.

Daeseong is a government-subsidized village that has an elementary school, church, and is tax-free. The government pays the villagers about $82,000 dollars to harvest crops year round. The homes are modern and have technologies such as the Internet. We were told that right now 230 residents live within the village and have to follow a curfew of 11pm. When these villages want farm their crops they must have a soldier escort. We were blown away by this but got to see a famer first hand with two soldiers guarding him work near by.

The only way to live within this village is if you are a woman who marries into it or have an ancestor that lived or lives within it.  We thought this was rather interesting.

We asked what the village does when the child reaches an age where they are above elementary level. We were told that the villager’s family can choose where to send the child to school and are basically exempt from the rule of staying so many day/nights within the village while that child is attending school. We also learned that there were currently about 20 some students and there were just as many teachers to the student ratio –wow-.  When one of the students graduates from school the surrounding ROK Army Soldiers, nearby town Mayor and government officials attends the graduation and makes a big deal about it with a celebration. The child ends up with so many gifts that they have to have two trucks bring the gifts back to the village for the graduating child.

On the north side the village of Giljeong is rather different. This village was actually constructed years ago and was basically empty and used as propaganda up until the past few years. Recently the village has had some activity with North Koreans living within it.

On the tour we stopped off at one of the observation towers where we could see from a distance the Giljeong village. The village has a 160m high Eiffel tower structure flying a huge North Korean flag weighing about 660 pounds. We were able to take some pictures to show you all but the wind wasn’t blowing hard enough to extend the flag out.

The tour included getting to see the bridge of no return. This bridge leads into North Korea and obviously has no return. Near this bridge is where the “ax incident” occurred and there is a memorial plaque in remembrance.

After touring around Camp Bonifas we got back on our original bus and went for lunch. We had our option of bulgogi or bibimbap. Most of us within our group choose bibimbap. The dish and sides were delicious and really inexpensive!

After lunch we were back on the bus and heading to the Dora Observatory and the DMZ 3rd Tunnel. We were not really impressed with the Dora Obsevatory as the observatory section was being worked on and we couldn’t access it. Hence we could only peer out the huge glass windows with our own eyes to see North Korea in the distance. We decided that we would have to go back and give it another shot to make a final opinion of the place.

The last stop on the tour was the DMZ 3rd tunnel. Right off the bat the tour guide will warn you that this is quite a hike and will take time to see. We knew what we were getting into because of friends who have already experienced the tour. We wanted to experience it because we never knew if we would ever get a chance to again.

There are four tunnels crossing the DMZ that have been dug by North Korea leading to Seoul. They say that there are around sixteen tunnels estimated in total. These tunnels have been discovered only within the past few years, 1974 to be exact. North Korea tried to cover up the tunnels by saying that they were for mining and painted the walls black to have the appearance of anthracite. Of course no coal was ever found in these tunnels.

The 3rd tunnel that we toured is incredibly sloped the entire way down. The tunnel signs read that the tunnel is 1,700 yd long and about 490 ft below ground. They did not allow cameras in the tunnel. However, we snapped a few pictures from outside of the building of the tunnel start.

You are required to wear a helmet if you go into the tunnel. We laughed because if anything did happen when you were down in the tunnel this flimsy plastic helmet was not going to protect you from anything. We quickly realized that the helmet served the purpose of protecting your head when you have to walk crouched over through the low and uneven tunnel ceiling. Poor Hector wacked his head a few times and when we were laughing we ended up whacking ours.

On the way back up from being in the tunnel the air feels heavy when you are making your way back up. We knew were in trouble when we saw Koreans stopping along the way back up to take a break because these are the people who hike tall mountains on the weekends for fun and walk as a major mode of getting around.

There is a trolley that will take you down the tunnel and back up if you call and reserve ahead of time with the exact number of people within your group. To get to the ending point you will still have to walk and crouch over at points.

In the end we are left with thinking that we never imagined in our lives we would be at the DMZ standing freely between two countries still at war. South Korea desperately wishes for unity between the two countries so that long lost family members can be reunited again and live in peace. …. We wonder if that will ever be in our lifetime? Who knows, maybe someday?