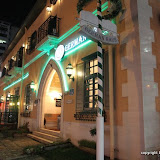 We have been hearing mixed reviews about the German Haus restaurant located in Uijeongbu. Everything from people love it and raved about what we were missing to others saying they were not impressed. Well finally we decided that we needed to give this place a chance and see what our take was on it.

The restaurant is very easy to find in downtown Uijeongbu. You won’t miss the place because it really stands out among all the taller hotels and other businesses. (Feel free to out the pictures to see what we mean).

Immediately entering the first floor of the restaurant we were greeted and welcomed by a Korean woman that was fluent in English. She said we had our pick of sitting downstairs or upstairs. Of course we were totally nosey and headed upstairs.

Upstairs a Korean man that spoke broken English greeted us. He took us to our table and gave us menus. A few seconds went by and our waiter a young Korean boy appeared to take our drink orders. You could tell he was a bit uneasy about the language difference but tried his hardest to communicate and get the order correct. We asked what the popular items or more desired items were on the menu and he struggled to understand. He went to get our drinks and then came back with the women from downstairs that originally greeted us.

We were told right off the bat that the restaurant was more so known for the German brewed beers on site as well as bottled. This really made sense after looking over the menu. Typically you do not see items like honey pizza on a German menu. Nevertheless, we were told the German sampler was a great choice to try a bit of everything.

The German sampler was tasty! It wasn’t absolute German foods but it was still really good. We enjoyed the wings a lot so we ordered more to munch on while we listened to the live Korean karaoke entertainment on stage.

We had a blast! We all agreed we would go back again knowing that it wasn’t a real “German food” place.

We suggest that you go with an open mind and try it out for yourself! The phone number and address is as follows: