Good morning! Up and at em’ let’s kick it off with a product review of Purely Elizabeth’s Maple Walnut Probiotic Granola. 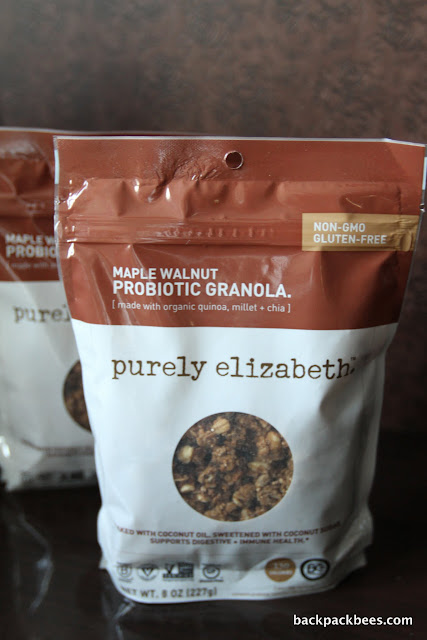 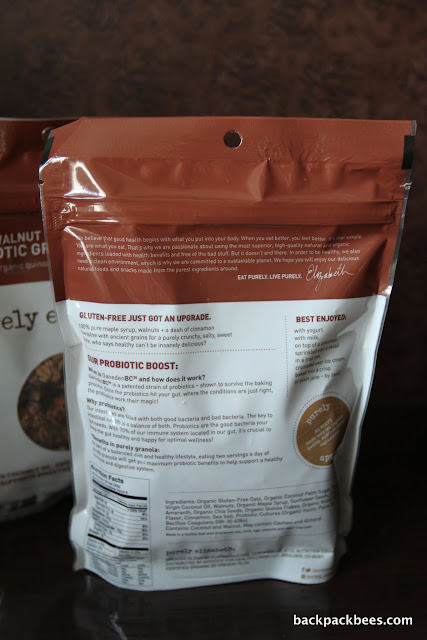 The flavor was great! The texture was great! Ohhh and the crunch was great too! Sweet but not too sweet, salty but not too salty, oaty… well you get the point. Everything I look for in granola I found! It was tasty just munching straight out of the bag, or getting a bit crazy like I did and throwing a serving on top with my Rice Krispy cereal, banana and Silk coconut milk this morning. MmmmmMmmm! 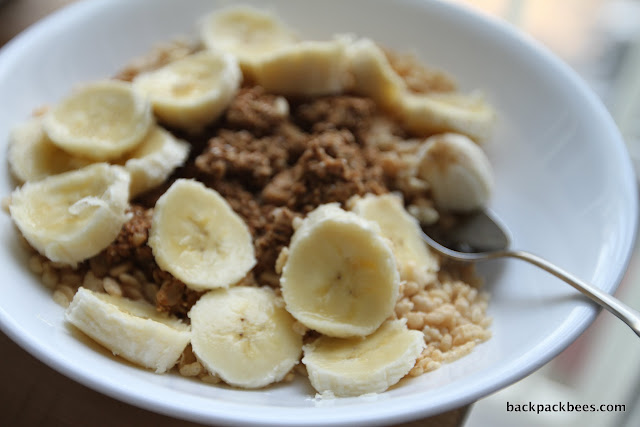 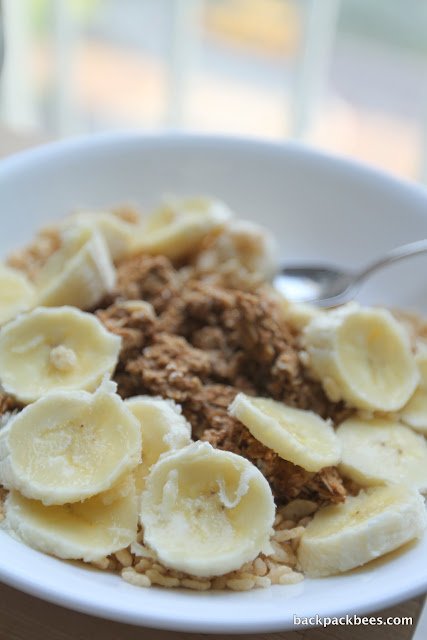 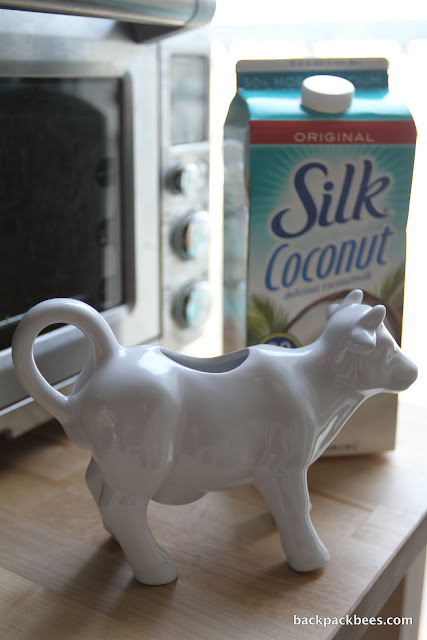 So why did I order THIS specific granola? I’m always on the hunt for healthy choices and this little granola claimed to foot the bill. It’s incredibly hard to find products that truly are healthier choices and not just claiming to be. You can pronounce and recognize basically all of the ingredients, again how rare is that?

For instance, instead of typical organic cane sugar, Purely Elizabeth contains organic coconut palm sugar, a considerably healthier sugar, as well as coconut oil too. I felt like the ingredients spoke volumes….take a look for yourself!

Since becoming pregnant I’m really mindful of what I’m putting into my body because I know what I’m ingesting essentially our bumblebee is too. Also, before moving to Korea, I had some serious stomach issues. All sorts of foods irritated my stomach to include some forms of dairy. I was pretty much plagued with an ongoing nightly upset stomach, sometimes even getting physically ill. Most of my issues have since gone, occasionally I do have an issue, however I really feel it was a change in my food and lifestyle. Korean food culture staples are fermented foods. Kimchi and other fermented foods have probiotic lactic acid bacteria (LAB), the good little gut fighters! So it wasn’t even a question adding a little extra help to my daily routine with my morning granola. Bring on those healthy probiotics!!

Oh…wait…did you catch that last statement? Probiotics! YES! This granola made with GanedenBC30. The site says, “It’s a Non-GMO, vegan strain of probiotics.” Why all the fuss? Well, “GanedenBC30 a strain of probiotic that survives the baking process, due to its protective spore. Once the probiotics hit your gut, where the moisture level and temperature are just right, the probiotics work their magic!” How awesome is that?!

Not keen on maple? Don’t worry! Other flavor options with probiotics are CHOCOLATE SEA SALT. I’m not really a chocolate person, (GASP), so I didn’t order. However, If you are not looking for probiotics, but just a great granola, they also have the following options available:

There were two downsides to the granola and Purely Elizabeth. One is the serving size. The bag list 1/3 cup at 130 calories as the recommended serving size. After topping off my breakfast bowl and realizing just how delicious the granola was, I wanted moreeeee! Hahaha! What can I say? Mommas gotta eat!! 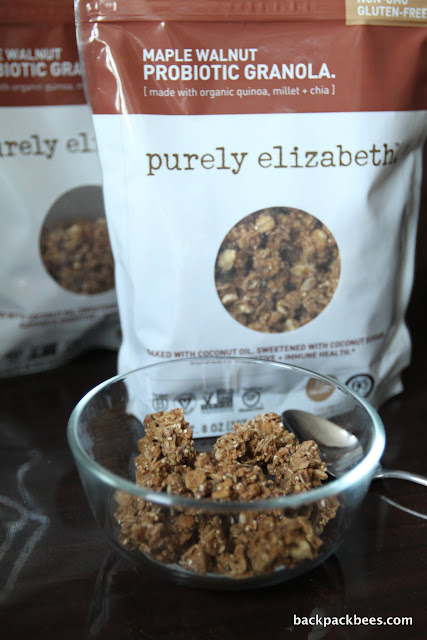 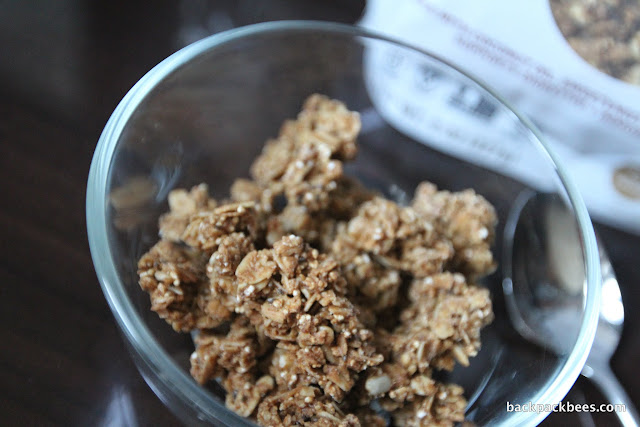 The other downside was dealing direct with the company Purely Elizabeth. Typically we’re big fans of Amazon Prime because of our location, however the specific probiotic granola I was after wasn’t being sold via Amazon, just other Purely Elizabeth varieties. So I had to place an order from the company direct. I ended up having a hard time ordering because it listed my shipping state as an option initially, only to reject the order at the end. I had to send an email, as well as three follow-up emails to rectify and place the order. I’ll be fair and will mention that once I did finally get a response back and assistance to place the order, it was easy. However…I almost gave up. (Better step up your game Purely Elizabeth!)

Would I order the granola again? While I’m not sure if go directly to the company website and deal with that again…. I’d absolutely go the Amazon route! I’m thinking blueberry hemp and possibly the banana one are calling my name next.

Did you hear that noise in your kitchen? That’s the sound of your breakfast spoon clinking against your soon to be tasty breakfast bowl after you place your order on Amazon Purely Elizabeth Ancient Grain Granola Variety 3 Pack Original + Cranberry Pecan + Blueberry Hemp

, or take a gamble and deal with the site directly here. Stateside folks also can pop into a local Whole Foods store, or select Target and grab some up too (lucky ducks).

What are your favorite granola brands? Do you have any crazy concoctions you’d like to share with us?