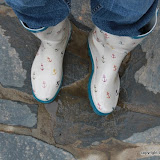 Today is a very overcast, rainy day in Dongducheon. Staring out the living room window I had a thought, we recently Skyped with a 3rd /4th grade class located in North Carolina that has been learning about Korea and following our blog site. They requested that we take them on a tour of the inside of our place and also wanted to ask us different questions about our experiences so far. There is a major time difference so we had to Skype at night allowing us to catch them during their regular class-time. We were not able to show the class what our “backyard” looks like due to the time of night.

We snapped some pictures of our “backyard” and learned a bit of more of traditional Korean culture. As you can see in the pictures we have three Korean burial mound sites and a large garden.

In Korea, it is very common to bury people above the ground, cover the body with rocks/dirt, and then grow grass over the body in a semi-circle mound shape (as captured in the pictures). It is said that in traditional Korean burial culture, the size of a grave mound increases proportionately to the social status of its owner. The ones that are located on the hillside in our “backyard” are a nice size but in doing research we came across what royalty mounds look like… HUGE!

The graves in Korean cemeteries are curved to reflect the belief in reincarnation. Basically, it’s like the Earth is pregnant with those entombed and is almost ready to give birth to them once more.

We learned that there is a bit of a difference in comparing graves to that of the US. Koreans traditionally buried the dead under mounds standing upright in coffins made from six planks of wood. These wooden planks represent the four cardinal points on the compass plus a plank for heaven and the other for earth. The corpses either face south or toward some important spiritual part of the landscape such as mountains because these are said to be homes of the spirits of the land and sky.

We also snapped a picture of part of the garden that is off to the right side when we look out our windows. We have been watching this garden get bigger and bigger every day. The Korean family that is planting is working at it daily and continues to expand into new earth. We can’t wait to see what grows in it!

Another major difference in Korea we recently discussed on a walk is just how many gardens there are. We love the fact that Koreans really utilize and take advantage of any grassy area, field, or strip of dirt that can be used for growing something. We are not kidding when we say they are everywhere!