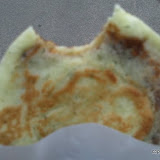 Today is the 15th so it happens to be a day when the big market occurs in Dongducheon. We wrote about the marketplace a few blogs back however when we went it wasn’t on the 5th day of the month so it was much easier to move around and take our time checking everything out.

Sarah decided today that she wanted to walk down to the market and see if any of the street vendors that had Ho-ddeok for sale. HA-HA that’s the understatement of the year! Korea ALWAYS has street food. It’s everywhere! In the video you can see that she was able to obtain some footage of the street that most of the market takes place on.

Ho-ddeok? What in the world is that? Ho-ddeok or ho-tteok is a delightful variety of filled Korean pancakes. Typically it is eaten during the winter season, however, it’s been sticking around all year due to the popularity. Normally ho-ddeok sells for around 500 won that’s about $0.50 in the states. How to describe what ho-ddeok taste like…..hmmmm….well, the taste is similar to that of a sticky bun. SO YUMMY!! If you visit Korea you have to stop by a street vendor and try it out for yourself. Don’t say that we didn’t warn you on how delicious and how addicting they can become!

The dough for ho-ddeok is made from wheat flour, milk, water, sugar, and of course yeast. The special part about this street vendor’s hoddeok is that there is green tea incorporated into the dough. The picture is hard to see but there are little green flakes in it. The hoddeok dough is rises for several hours. You can see in the video that handful-sized balls of the thick dough are filled with a delicious sweet mixture that can contain brown sugar, cinnamon, honey, sometimes chopped peanuts. Once the dough is filled it is then placed on a greased griddle, and then pressed flat into circles with a tool that consist of a stainless steel circle and wooden handle. I was able to capture ajumma (Pronounced a-jum-ma, meaning a married women or old enough to get married) making ho-ddeok at the market on my little camera to share with all of you.