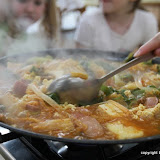 Today I got invited with a group of friends to check out Uijeongbu and experience Budae-chigae. Okay, ha-ha have I lost you yet? Uijeongbu is a city that is located south of Dongducheon (On the train it took about 15 minutes or less to get there) and Budae-chigae is a Korean spicy stew that the area is famous for.

Budae-chigae, (pronounced boo-day chee-gay) can be translated into army or military stew. This stew is typically cooked right at your table in a large pan that has the resemblance to a large hubcap (please see the pictures). This stew is shared among people and in this case we ordered three orders and still had leftovers when everything was said and done. I was told if you showed up alone and tried to order this stew they would refuse to serve you because it’s a dish meant to be shared. I’m not sure if anyone else out there finds this comical when doing a comparison to the US or not… when would a US business ever turn away a paying customer??

Traditionally this soup is spicy in taste because it is made with red pepper paste much like other traditional Korean dishes. However, we ordered two of the dishes to be toned down due to some of children and ladies preferring it that way. I personally had to try both out to see what one I favored. My choice would definitely be the traditional Korean spicy way…but I enjoy spicy foods. I wasn’t too sure to expect with the Spam. Spam really isn’t a meat of choice where I grew up, however, the spam in this soup never tasted so good!

Some of the ladies in the group showed us the restaurant of the women who first cooked up Budae-chigae. We didn’t eat there because it was much smaller than the other place that we were going to. At first we were a bit concerned because we had such a large group and it was right at lunch time. When we got to the restaurant we almost turned around because the entire first floor was packed. Two ladies came running out and called for us to come back in that we could go upstairs and the kids could run around. We were thrilled! The waitress was very prompt and threw in extra rice cakes for the road.

The history of the Budae-chigae dish is really what I found to be the most interesting. During the Korean War, the Korean soldiers did not have much to eat other than kimchi, rice and some other veggies. Meat was a rarity because of how scarce it was. Korean soldiers known as KATUSA’S (Korean Augmentation To the United States Army) found meats such as hot dogs and spam from the American soldiers and would make a meat stew out of it with the other things they had like them kimchi, veggies, and noodles.

Now how is Budae-chigae relevant to the Uijeongbu area? Uijeongbu is known as the “birthplace” of this stew because of its location during the Korean War. Today Uijongbu is home to Camp Red Cloud where the US second Infantry Division is located. When walking the streets of this town you can find tons and tons of restaurants dedicated to serving up this spicy piping hot dish.

Overall we had an awesome day! Made some more great new friends, got to try another traditional Korean dish, and got to sight see. It will be exciting to go back and explore some more!

Feel free to check out the restaurant’s Website: http://www.boyoung1129.co.kr/