Buh-Bye Christmas holiday and Bee’s tropical vacation! That’s right, Christmas has officially come and GONE and I can’t tell you how sad that makes me. I must admit though, this was probably the best one yet!! 🙂

I have a confession to make… I have loathed tuna noodle casserole since I was a child. I’m not totally sure if it was because I felt like my stepmother at the time knew I despised it and continued to make it or, if it was just the strange concoction of tuna and noodles itself. Whatever the case was, I have successfully avoided it throughout my entire adulthood thus far. Well, that was until I realized that I was depriving my hubby of one of his favorite meals.

Today I decided that I would give the dish a go again. Who knows… maybe it really isn’t that bad after all, right?

RIGHT! I actually have a healthified tuna noodle recipe that not only Mr. B loved, but now I love just as much too. 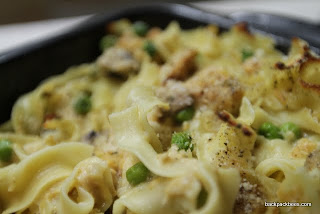 First, I Cooked noodles in water until slightly undercooked. Set them aside.

I used a large deep skillet pan to melt my butter. Add in your onions and cook on medium heat until they start to get soft, all and all it’s about 5 minutes. Next, add flour and stir well because it’s going to get a bit crumbly.

Preheat your oven to 370°. Lightly spray your casserole dish so that the noodles do not stick.

On the stovetop slowly whisk in chicken broth until it is well combined, turn up the heat to medium and continue whisking mixture for 30 seconds, add the milk and bring the mixture to a boil. When the mixture is boiling, throw in your chopped mushrooms and peas, add in salt and pepper to taste and simmer mixture on medium heat. You want to mix occasionally until everything starts to thickens, this will be about 5 minutes. Next, stir in the drained tuna.

Remove the mixture from the heat and mix in the reduced fat sharp cheddar, it will melt into mixture. Add your egg-noodles to the sauce until noodles are evenly coated. Last step is to pour entire noodle mixture into your sprayed casserole dish, and top with parmesan cheese and breadcrumbs (listed above).

Bake uncovered for about 15-20 minutes. If you desire a more crispy casserole top, place the dish under the broiler a few minutes to get the crumbs nice and crisp! Word to the wise, be careful when the dish is under the broiler that it does not burn.

Bon Appétit! We Bees are looking forward to making this dish for years to come.

Can you think back on foods that you never would have touched when you were a child, and today you just simply cannot consume enough?