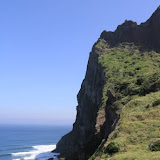 Day one of the trip started off fairly early. Our flight was scheduled to leave Gimpo airport located in Seoul at 9:55am. This meant to beat traffic we had to get on the road at 7:00am sharp. Surprisingly our group did just that and was on the road on time bound for Jeju!

The best part about Jeju is how close it really is. The total flight time was only about 55 minutes. Very quick! We all laughed and said it was just enough time to get comfortable in your seat and then you were ready to land.

We had a lot of kids on the plane and they were all troopers! We hardly heard a peep from any of them. Honestly looking back they all deserved a huge treat of some sort because during the trip they missed nap times, walked, were exposed to the hot sun, and had to eat Korea food.

When we landed at the airport we were met by our guide Ms. Kim. We cannot praise this women enough! She was an absolute hands down fantastic tour guide! Plus she put up with all of us winy Americans. Ms. Kim is was born and raised in Jeju and speaks English incredibly well. We both agreed that if we find ourselves back in Jeju we will be giving Ms. Kim a call again.

We didn’t go directly to the hotel to check in. We loaded up our luggage on a large tour bus and we sought out for our first destination point. Cameras in hand we were ready!

First stop, Seongsan, also known as “Sunrise Peak”. Sunrise Peak is a plateau-like basin which is the crater of an extinct volcano. Eek! That’s right, we said volcano! Don’t worry it’s not active so we were safe. We didn’t get to see the sunrise here because of the flight times but we did get to see the panoramic views that this crater offered. This was after we hiked up a ton of stairs (just a warning). If you get to visit, take the time and hike it! You will not be sorry.

After hiking the crater it was time for lunch. Our group had reservations at a Korean style bi bim bap restaurant. This place was outstanding! They were fully prepared for our large group and had our hot stone bi bim bap ready to go as soon as our bums hit the seats.

After lunch we had a few moments before having to board the bus so we walked down an alley right outside of the hotel and got to see some scuba divers coming in from a dive trip. Mr. B’s heart skipped a beat and he was in awe watching them unpack with all of their gear. Of course for the next few moments he repeated that he couldn’t wait to get the rest of his PADI certification completed.

It was now time to leave the restaurant and be on our way to the next stop on the itinerary. It was another crater known as the sangumbury Crater. The steps were not nearly as rough at this spot. I am sure you are asking why in the world are we going to see yet another crater? Well, the cool thing about the Sangumbury Crater is that it is the only extinct volcano on JeJu island located at ground level. It really is pretty crazy when you think about it. We were impressed by how green everything is on JeJu. The crater had lush forest growth and animals inhibiting it. We were told by our guide that the crater is being studied for that very reason. Interesting, huh?

After we were done at Sangumbury Crater our next stop was the JeJu Folk Village. The village exhibits a comprehensive collection of traditional folk articles from the island ranging around the year of 1890. We met a couple on the trip that were from Panama and he tearfully said that the JeJu Folk village really reminded him of growing up in Panama. It blew our minds getting to look at the village houses and cultural items. By now the sun was scorching us all so luckily there was a snack stand along the trail that served ice-cream. Most of the group bought ice-cream and the other half bought a cool drink. We were all starting to drag so the cool treat was a definite pick-me-up. Ms. Kim finagled a deal that allowed our group to take the tram the rest of the way through the village and back to the bus. Whew! Not a single soul had an issue with that.

We loaded up the bus and the next stop was to transfer to the hotel and check in. We arrived at the Ocean Suites hotel at about 5:30pm. The staff treated the group very well and had the check-in process set up so that we were all able to get to our rooms quickly. We L-O-V-E-D the hotel room! Everything about the hotel was new and fresh. The decor was very modern and sleek, and the view was of the ocean and an outdoor performing arena. Ahhhhh…we didn’t ever want to leave. Our tour group package included breakfast every day at the hotel restaurant. The restaurant featured a large buffet of both western and korean dishes. We would highly recommend the hotel to anyone planning on taking a trip to JeJu. The hotel location is: #1-1260 Samdo-2Dong, JeJu-City, Telephone: 064-720-6000, and website www.oceansuites.kr .

After a long day of fun filled events we took showers and got ready to find some place to grab dinner at. We ended up linking up with a couple and had a blast! We ate at a Korean style restaurant that served Samgyeopsal. We have mentioned having this sort of a meal in past blog postings. Anyways the thick slices of pork with the sides really hit the spot! We were stuffed when we left and all agreed it was an excellent choice.

After dinner we headed back to the hotel but along the way we heard music and singing coming from the outdoor performing arena that we could see from our room. Of course we had to go check what was going on out. The performance was a song that described a story. The only thing we really could take away from it was that it was about fishermen with large casting nets.

With bellies full and eyelids heavy we all decided we were going to head back to the hotel and get some rest. Day two of the trip is a free day with lunch and dinner on your own. Wow does time fly when you are having fun!