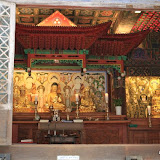 The weather in South Korea has been changing ever so quickly. Each morning and evening seems just a littler cooler then the day prior. We Bee’s are originally from Central Pennsylvania so we are used to experiencing four seasons. To us there is nothing like being able to go to sleep in the evening with crisp cool fall air creeping in through your bedroom windows. In all the places we have lived or traveled to, we both agree that Pennsylvania has some of the most breathtaking fall scenery. However, we are giving Korea a fair chance and will await to see when the leaves start to turn on the mountains what it has to offer up.

With that being said, today we woke up to another cool September morning here in Dongducheon. We decided that we were going to take advantage of the weather and try to hike our way up and over Soyo mountain located only a few minutes away from our apartment. The weatherman was calling for showers but the sun was still peeking through the clouds and really didn’t look like it was going rain. We decided to take our chances and just go for it.

What we both like about Soyosan is that you park and have to walk up a beautifully tree lined paved road until you reach the base on the mountain. A few posts back you can see where we messed around with the camera and snapped some pictures of us together on this road at night. Along the tree lined road runs a crystal clear stream. During the spring and summer months it is a very popular location for Korean’s to be picnicking and dipping their feet in the water to cool off. Today, as we mentioned is a bit cooler so there were not as many people spotted along the stream.

Before you can continue walking to the very base of the mountain where you begin your hike you have to pay a 3,000 won admission fee. Unless that is, you have have a Dongducheon Korean license, then the admission is FREE!

As you know from prior blog posts we have visited Soyosan numerous times. However, we have never actually hiked the whole trail.Typically we only go up to the Buddhist Jajaeam Temple snap some pictures and turn around. This time…we were ready!

Looking back on the hike we determined that depending on your physical physique you can basically reach the top of the first peak within 30-45 minutes. Now we took our good old sweet time, snapped a ton of pictures, rested for about 45 minutes, and ate some snacks along the trail, so it took us roughly an hour and a half to reach the first peak.

As we mentioned, we snapped tons of pictures and they are included within the post at the top. We also snapped pictures for various Korean couples along the way too! We met a sweet couple that insisted we try their Korean cake. Mr’s B enjoyed it but Mr. B was not a fan. We encountered many couples and each tried to share whatever they had with us including Makkoli the Korean-rice wine. Uhhhh yeahhhh we didn’t tell you that we were very bad and didn’t start the morning off right with a nice hearty breakfast… wine would have made that hike really interesting.

After reaching the first peak we were pumped and moved fairly quickly to the next two peaks. Along the way in between each peak there are areas where you have to crawl over some rocks, use a rope to guide you along narrow stretches of trail, and go up or down a lot of stairs.

Because of the time and our plans to host dinner for some friends we had to get a move on it and truck it back down the mountain, and unfortunately that meant missing the last peak. Again, looking back we should have just hiked the last peak because the path we took to get back down the mountain was insane! The path was totally washed out from all the rain and flooding South Korea experienced in July and the trail was full of rocks that just tumbled down the side of the mountain. We were part of the way down and there wasn’t a person in sight. Ms. B started to say what in the world were we thinking?! How did we get ourselves into the mess… It was a bit to late to turn back so we just had to commit to the rest of the hike down. It ended up taking us a little over a hour just to get down because of the unstableness of the rocks and lack of actual tail. At last we spotted some Korean hikers climbing their way up the path and we heard a family not to far behind us. Okay, we were not the only crazy people on this trail…Mrs. B’s feeling better. Well, that was until Mr. B said make sure you are watching for snakes! Snakes?! Ah! that’s not even a thought that crossed my mind as I was crawling down the rocks (Mr’s B.) Luckily, no snakes were spotted, the rocks didn’t crumble down and crush us, and we eventually made it. Mr. B would like to think this is all due to his advise of “three points of contact”. Mrs. B would like to think it is due to her uncanny direction capabilities ha ha! Nevertheless, WE MADE IT! In one piece… well, not quite, Mrs. B ended up falling due to sliding on the steep slick dirt and catching herself by putting all her weight on her arm and shoulder (she’s a bit sore). Mr. B’s knee gave out a few times on the rocks (needless to say he will definitely be feeling that in the morning). But again, WE MADE IT and that is all that matters!

We understand if you are dreading the initial thought of a hike or might be unsure about trying it after reading over our post. In all seriousness we had a blast and we promises that the picturesque views overlooking the US Army base Camp Casey are worth the hike alone! Not to mention spotting multiple Korean war era bunkers (how cool is that!)!

Cheers to all the baked ziti with sausage and caprese that we will consume tonight without feeling guilty!