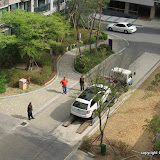 Actually, we were just getting used to the fact that we were living without all of the things we had back in the US. This experience has made use both question is there really a true need to live with all of this excessive stuff? We had the bare minimum of necessities while we awaited our shipment but we were doing rather fine without it. However, it is nice to open up one of your kitchen drawers and be able to have your pick of tools to get whatever you are cooking done.

The movers came promptly at 9AM and were out of here in a little under 2 hours. We were impressed at how quick and efficient they were!

First, the movers unloaded the car off of a wrecker, next they came around the back of the building and lined the ladder truck up with the living room windows to unload all of the items through, then they brought the truck around with all of the boxes and furniture, loaded the platform up with everything, brought it through the window opening, called out a number that was marked on everything as they took it into each room, Larry checked off the numbers as they came through, I inspected to make sure nothing was broken and everything was there that the movers packed in the US.

The car looked awesome with no scratches or things missing from it. Everything arrived the way it was packed up in the US except for the living room furniture that had scratches in the wood and an oil stain on the arm and back of the oversized chair cushion (I covered it up with a blanket for now so we don’t have to see it). We were a bit disappointed but we both agreed that it has had a good life and when we officially settle down we can replace it all, and of course that is what insurance is for.

We had to laugh because we have a king size bed (that we decided to bring because we had just bought it before the whole unexpected South Korea move) and the Korean movers thought the two boxsprings were two single beds. I guess this is because Korean mattresses are so incredibly different. We had a love hate relationship with our Korean mattress. I hated it and Larry loved it because it was like sleeping on a rock with no fluff whatsoever.

Right before the movers left they helped us adjust where we wanted the living room furniture took all the excess of empty boxes and then were gone.

We believe that the key to getting through these crazy days is to just have fun with it. We were like little kids in a candy store as we unpacked all of our kitchen spices. Even Miss Bean acted like she had not seen furniture in years! We caught her rolling all over our bed and couches repeatedly.