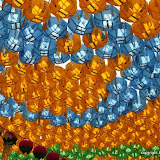 This weekend marks the two-thousand-255th anniversary of Buddha’s birth. Located on the main street in front of the Jogyesa Temple, we checked out the Buddhist street festival. This festival featured over 100 booths set up to demonstrate ceremonial tea-making and ceremonial bowing (a special breathing method used by Buddhist nuns).

The best part about this event was that most everything offered was FREE! We were totally taken back at how much stuff there was to do, sample, and see all for FREE! There were also designated translators for foreigners who were at the festival and were struggling to understand or communicate what was was going on.

We made lotus flowers, sampled traditional teas, tried various temple foods, got to try on traditional Korean hanbok clothing and have our picture taken, had our face painted with a lotus flower, went inside the beautiful Jogyesa temple, got our last name written in Hangeul the Korean alphabet, and checked out various stage performances.

When we were getting ready to leave we came across the Tibetan monks making a sand mandala. This sand mandala contained various colors of sand that are made from crushed gypsum (white), yellow ochre, red sandstone, charcoal, and a mixture of charcoal and gypsum (blue). Don’t worry we snapped pictures to show you what we are talking about.