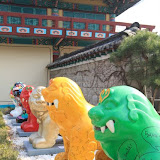 Children’s Grand Park was originally opened on May 5th, 1973, and covers over 138 acres all geared towards children. Right when we got inside of the main entrance a park attendant approached us and provided us with a nice park guide and tried his best to tell us a little about the park.

The original area was the grave of the wife of King Sunjong, the very last emperor to the Joseon Dynasty. The tomb was relocated in 1926 and then later used as a golf field before being sold off to the city of Seoul Government to be renovated into what we know as the Children’s Grand Park.

The park offers tons of green grass and paved areas for a child to run free and burn off energy! There is a zoo, some vendors and eateries, a music fountain, outdoor concert center, fairyland, roots garden, an environmental pond, animal school, adventure land, design Seoul gallery, a botanical garden, a kids auto park, marine animal house, parrot village (where you can hand feed the birds), a small animal village, the world of ferocious animals, a water playground, an animal show theater, amusement park, and tons more! Curious to know the cost? Get ready for this…. FREE! This place is absolutely FREE! The only thing that you would have to pay for is if you purchase food to feed the animals, yourself, or souvenirs. The Park opens at 5:00AM daily all year and closes at 10:00PM. Just another reason why I absolutely love this place!!

The group all snapped tons of pictures and I wanted to get mine posted so that they could take whatever ones they liked as well. In some of the pictures you will see get to see “flat Stanley”. Today was my first day learning about Stanley from Stephanie and I thought I’d share what I learned on here too.

The Project allows opportunity for students to make connections with students from other schools who’ve signed up with the project. Students begin by reading the book and becoming acquainted with the story. Then they make paper “Flat Stanley” and keep a journal for a few days, documenting the places and activities in which Flat Stanley is involved. The Flat Stanley and the journal are mailed to other people who are asked to treat the figure as a visiting guest and add to his journal, then return them both after a period of time.

If you want to know more or want to get your class or child involved check out the website http://flatterworld.com/?nav=home – While you are there view the live map of where Flat Stanley is located.