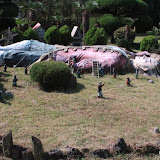 Day two of the trip we woke up to the most beautiful sunny day! The sun rays were beaming off the ocean waves, the clouds looked like gigantic marshmallows, we just knew the day was going to be amazing.

We woke up at 7:00am, ate breakfast at the hotel restaurant buffet, and took a cab to Mini Mini Land. Mini Mini Land is located in Jeju Special Self-Governing Province Jeju-si Jocheon-eup Gyorae-ri San 56-4.

So what is Mini Mini Land? Mini Mini Land is a large park that features 116 famous miniature replications from around the world. To name a few, we got to see the miniature Bulguksa Temple, the Statue of Liberty, the Great Wall of China, the Forbidden City, the Leaning Tower of Pisa, etc. Each replication is constructed at 1/15 or 1/30 of the actual size.

After Mini Mini land we went back to the hotel and back up with our friends and decided to grab lunch together. Waiting for them at the entrance of the hotel we ran into some other friends that gave us the address of an Indian Food Restaurant near by. We were pretty excited about the sweet information they gave us and thought we would stick that in our back pocket in case we were in need of a place to go. It turned out that the couple we met up with for lunch were all about trying out the Indian Restaurant and we all decided to grab lunch there.

The trip to the restaurant was interesting because the cab driver had no idea of where the place was. However unlike the Bee’s past experience of the cab driver trying to give the boot out of the cab because he was frustrated with not knowing the exact address this guy was pretty determined with finding the location for us to enjoy a meal at.

After about 15 minutes or so and a few phone calls later the cab driver took an alley and sure enough there was the Indian Restaurant, Bagdad Café! We laughed and said we didn’t quite understand the cafe name connection to the Indian culture. The cafe’s kitchen is actually ran by a Nepalese chef, and was named after the film not the city, features cool rustic music and an outside terrace.

Wow-We! we cannot express enough how delicious the food was at this place. We all shared each others dish so we had a chance to try everything out. Mr. B ordered a lamb curry, Mrs. B ordered a chicken tangri kabob stuffed with cheeses, cream, and indian spices (cooked over charcoal to perfection), and our friends ordered chicken curry, and chicken tandoori,of course we each had garlic naan.

The café atmosphere was quaint and very comfortable. The waitress spoke English and Korean and was very attentive to our table.

Hours after eating at Bagdad Café we were still talking about how great the food was! The café is located in the City Hall area of Jeju City. The address is Korean to give to your cab driver is: 바그다드 대한민국 제주특별자치도 제주시 이도2동. The address is english is: 1186-16 Ido 2-dong, JeJu City. The phone number is: 1188-16 064-757-8182‎.

After lunch we were on our way to Love Land. We found this place in another bloggers blog so we decided to go there. This theme park is for ADULT’S ONLY (in our eyes and according to our standards). However once were at the park we couldn’t find anywhere that had ANY warning or restriction for minors. We have password protected this post titled JeJu (Day Two) Love Land Adults Only. The password to view this blog post is iam18orolder . By typing in this password You must be at least “18” years old to view. By typing in this password you are certifying that you are at least “18” years of age and Backpackbees is not responsible for any of the photo images you are about to view. Thank you for your understanding : ) The link to the Love Land post is Here.

After a stroll through Love Land we headed to E-Mart to see what was there and made dinner plans with our friends to meet up at 7:30pm. We Bee’s wanted to see what JeJu had to offer on the streets and ended up in a huge underground shopping market (Jung-ang) located only minutes away from the hotel. The market was pretty cool and featured a ton of tiny shops offering all sorts of clothing, food, etc.

At this point our legs were really tired and we still wanted to get cleaned up before going out to dinner so we went back to the hotel and got ready for our dinner date.

We met up with our friends again at the hotel entrance and they picked the White House restaurant to go to for dinner. We were game! Eagerly looking forward to checking this place out after Ms. Kim provided an excellent review of the place. We caught a cab outside the hotel and the cab driver was pretty cool! This guy was originally from Seoul and spoke very good English. His appearance and style was very western and his hairstyle was like Elvis HA-HA! We had some good laughs with this guy! The best part was along the ride to the restaurant he called and made reservations for us and when dropping us off he ran in and asked for them to give us a discount. Talk about service!

We pulled up to the White House Restaurant and were immediately taken back again by the beauty of the ocean. The sun was moments away from setting and the breeze coming off the ocean was just perfect. All we could think and say was, “Do we really have to leave this place tomorrow?” We walked up and down along the ocean and just took it all in before heading into the restaurant.

Okay, back to the White House review. We were all really impressed yet again with this restaurant selection. The White House opened its doors back in November 2004. The intent behind this monstrosity of a place was that they wanted to sell a lot of kids of foods like a buffet, spaghetti, steak, and pizza. At the time there was no wood-fired pizza on the island so they decided why not!?

The first thing you will notice when pulling up to the restaurant is that the place is HUGE! The interior and menus are intense but in a good way. There are different levels each catering to what you are in the mood for that day. An article we read about the place said it best, “There are two spectrums, with everything in between. All budgets and people are welcome. The bourgeois meet the proletariat. An abalone steak meets a paupers dinner roll. Expensive red wine meets a students Coke. Louis Vuitton meets Hello Kitty”…I think you get the point, right?

We ended up on the third flood by accident. However the accident turned out to be a blessing because we found and smelled the 65-item buffet. The average price of the buffet is about 27,000 won. Once again we filled up on delish foods and ate until we were stuffed!

The restaurant address is as follows: Yongduam 3 dong 2572-4. Telephone number is: 064-712-3200. We highly recommend the White House for dinner when you are vacationing on JeJu.

Once we got back to the hotel our heads were ready to hit the pillow yet again after another adventurous day in JeJu.