Most of our family and close friends have already seen the video and now we want to share it with the rest of our blog friends. Mrs. B is still working her way through video editing. This is her first attempt (please be kind) but feel free to let us know what you think!

The video is from our experience attending the 2011 Lotus Lantern Festival held annually in Seoul. We hope that you enjoy!

If you haven’t already done so, please feel free to check out the pictures from the festival back in a previous blog posting. 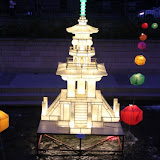 We had an AMAZING time at the Friendship Festival at the Seoul Plaza, Mugyo-dong! The festival is just a small piece of the action going on in this bustling city in the beginning of May. We found out in doing a bit of research that the festivals going on this week are 9 days and are spread out over 8 different surrounding areas. We think it is awesome that the city does this yearly and we would have loved to have experienced every part of the festival but unfortunately we were only there for the weekend with an event packed schedule.

We lucked out with the weather because it was forecasted to rain the entire weekend we were booked to stay in Seoul. However the weather turned out to be gorgeous the two days we were there!

The festival featured booths from 60 different countries all coming together to celebrate global unity and diversity. Each booth had regional crafts, traditional foods, and native performances. We snapped some pictures to share our experience with you all.

Onto the foods…the foods were delicious! Most countries wanted you to try a sample of the foods being offered thus enticing you to buy the foods. The foods being served ranged from hot dogs at the United Kingdom stand, pastries from France, joojeh sandwiches from Iran, Mythos beer from Greece, Turkish ice-cream from Turkey, bratwurst and Krombacher from Germany, or Larry’s favorite Norway serving up your choice of smoked or grilled salmon sandwiches. Basically we shopped, took in the sights, and ate ourselves around the world that afternoon. MmmMmmmMmmm!!

If you are ever in Seoul during the month of May we highly recommend that you head downtown and see what it is all about.

After spending the entire day at the Friendship Festival we decided to check out a café by the name of Artisée and rest out feet until it was time to head up the street where the Lotus Lantern parade would take place. We snapped a few pictures of the Café really enjoyed the green tea latte, coffee, and cappuccino.

Once the sun started to go down we decided we better go and find our spots for the Lotus Lantern parade. We heard that you need to stake out prime parade real-estate…we quickly found on that this is no joke! The parade ran from Dongdaemun Gate to the street in front of Jogyesa Temple. At first we were smushed in a large group of people hardly being able to see above some other foreigner’s heads and trying to take pictures and video by holding the camera up over the crowd. Luckily we were able to worm our way up to the front where we were able to see and take pictures of everything.

One of the best things we love about Korean’s is their willingness to come up to foreigners and try to explain what is going on at a festival or what something is. We learned that the Buddhist believe the lighting of a lotus-shaped lantern symbolizes the devotion to preform good deeds and that it lights up the dark parts of the world that are filled with such agony. We also learned that the lantern-lighting practice was developed by the Goryeo and Joseon dynasties and is still preserved by public demonstrations such as this parade. This year the city really tried to incorporate bringing foreigners into the mix by offering lantern making events, tasting temple dishes, and making your own rubbings of a Buddhist shape.

The parade reminded us of a much grander scale of the Macy’s Thanksgiving Day parade in the United States. The parade featured more than 1000,000 massive, illuminated lanterns in various shapes of lotus flowers, elephants, dragons, fruits, and much more. We were so awe-struck getting a chance to take in these orbs of lighted lanterns bob and sway down the entire Jongno Street.
The lanterns are carefully hand crafted with materials such as silk or paper and represent health, longevity, or bountiful harvest. The parade lasted a little over 2 hours and 30 minutes.

After the parade the Hoehyang Hanmadang post-parade celebration kicked off. The event was held at the Jonggak Intersection and started roughly at 9:30PM until about 11:00PM. It was crazy because as soon as the parade ended they lifted up the tape holding people back from entering the Lotus lantern parade route and people rushed to grab a seat in front of the two large screen TV’s and stage. We knew there was a post-parade event scheduled but we had no idea that we were in the right location to quick grab a spot up front.

The post-parade celebration was just as fantastic as the parade! We got to experience all sorts of traditional and modern Korean dancing and singing. To end the night there was a Korean time-honored traditional circle dance known as a ‘ganggangsullae’ dance, this is where everyone holds hands to dance and sing amongst the flying flower petals (check out the pictures). We loved getting to experience this huge crowd of people all singing and holding hands dancing around in formed circles. After the dance the burning of written seowon (wishes and resolutions) were released from the lanterns of hope. This is a ceremony in which 100,000 wish lanterns are let loose into the sky.